To continue its expansion strategy for the international market, Zinkia will attend the most important licensing fair in Europe, Brand Licensing Europe. 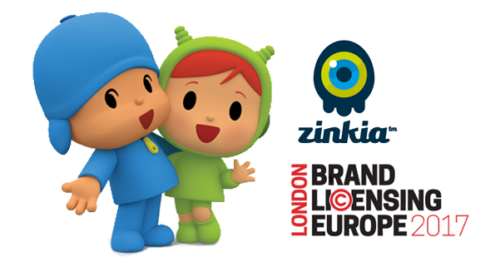 To continue its expansion strategy for the international market and seek new growth opportunities, Zinkia will attend the most important licensing fair in Europe, Brand Licensing Europe, which will be held from the 10 to 12th of October this year.

Brand Licensing Europe is one of the region’s leading licensing events and brings together more than 300 leading brand owners with more than 7,500 retailers, licensees and manufacturers. Its goal is for brands to meet current and potential licensees, as well as strategic partners, in addition to networking, see all the new products and launches of the companies, and detect the latest trends in the sector.

For Zinkia is the perfect time to share the new company plans and the new developments it has for the end of 2017 and 2018.

Those interested in contacting the company and arranging meetings can send an email to licensing@zinkia.com

Zinkia’s commitment to international markets is firm. For that reason a Master Agents agreement with the Brazilian company Dogs Can Fly Licensing has been signed, making them the official Licensing & Merchandising agent in Brazil.

Zinkia’s commitment to international markets is firm. Brazil, where Pocoyo has an outstanding track record, is one of the key territories targeted for international expansion and for this reason, a Master Agents agreement with the Brazilian company Dogs Can Fly Licensing has been signed, making them the official Licensing & Merchandising agent in the country.

The agreement includes the exclusive management of consumer products rights in the categories of toys, textiles, publishing, childcare, Meet & Greet, etc … In addition, Dogs Can Fly Licensing will be responsible for the management of advertising and promotional activities based on the series.

As a result of this alliance, on the 29 and 30th of August, Dogs Can Fly Licensing attended the Expo Licensing Brazil Fair, one of the biggest events in the international licensing sector, representing Zinkia. The fair is attended by more than 800 brands and prominent representatives in the industry such as Hasbro, Mattel, Disney, Warner Bros and Universal amongst others.

At the fair, the company announced its projects for the Brazilian market, which has become one of the territories that generates the most growth for Pocoyo  on YouTube with 1.18 million followers, Brazil has registered the largest number of subscribers in the official Pocoyo channels and has already surpassed 1 billion views.

This is one of the reasons why Brazil is a determining market in the development plan of the Pocoyo brand at an international level. A plan that will be reinforced in the coming months by Zinkia, after formalizing on August 8th, a capital increase of 4,05 million euros.

The market momentum in the area of Licensing & Merchandising, which has developed over 15,000 product references to date, is one of the strategic objectives within this plan; as well as the diversification of the audiovisual catalog, through the development, production and exploitation of other brands owned by the company.