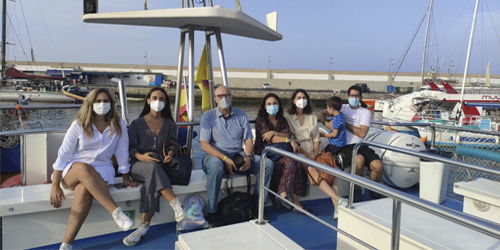 Recently a group of journalists had the opportunity to be the stars of “Isla Dragon”, the latestst episode of Pocoyo, in which he changes his traditional white background for real images of some of the most emblematic places on the island of Gran Canaria. With the support of the Cabildo, which participated in the co-production of the chapter, they have been able to visit, like Pocoyo and his friends, the most emblematic places on the island and learn about the legend of the last black dragon.

Through the Tourist Board, the Canarian Government’s collaboration with Zinkia seeks to promote Gran Canaria as a family tourist destination among international travelers.

In “Dragon Island”, Pocoyo lives an incredible adventure in search of the last black dragon. Together with his friends Pato, Lula and Elly, Pocoyo visits emblematic places such as Playa del Inglés, the Dunes of Maspalomas, the Natural Monument of Roque Nublo or the Tilos de Moya forest; and throughout the trip they have the opportunity to meet the island’s inhabitants thanks to Pato’s friendly “Canary cousins”.

These and many other places have been  visited by the media that have participated in the press trip, among which are important national newspapers such as El Mundo, Ok Diario or ABC and the radio station Onda Cero.