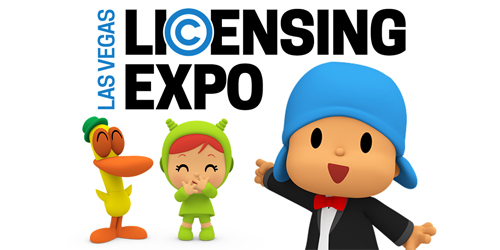 Zinkia were present at Licensing Expo, the major meeting point for the global licensing market, which was held again in Las Vegas from May 24th to 26th. This new appointment with the licensing industry, which has come after two years of absence due to the pandemic, has celebrated its 40th edition in person.

Pocoyo came to show all its novelties, such as the new episodes of the latest season produced, and a preview of its upcoming projects. The series has now accumulated four seasons (52 x 7`), in addition to 53 music videos and special content. It also has a short film of 25 minutes “Pocoyó and the Space Circus”, the production “Pocoyó: your first film”, and the co-production “Isla Dragón” made with the Cabildo of the island of Gran Canaria (Spain).

Víctor M. López, GM of Zinkia, and Eduardo Garagorri, commercial and business development director of the company, attended this new edition of Licensing Expo, where they had the opportunity to meet with the main players in the sector, who have shown great interest in the brand, to establish collaborations and agreements for future projects.

Currently, Zinkia has many licensees, and among these partners are master toy and first-class distributors, such as Bandai, Comansi, Hoffmann, Clementoni, and CyP, among others. Their product references on the market are grouped into more than twenty categories, including toys, publications, textiles, Back to School or baby care, etc.